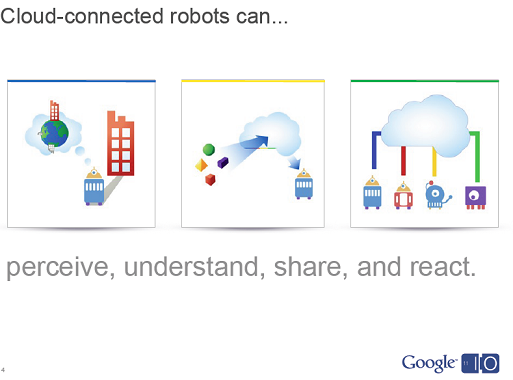 That’s the high-level takeaway from Google’s I/O conference this week. Google launched rosjava, a ROS (robot OS) framework in Java that is Android compatible. The move coupled with Google’s Android Open Accessory API, which aims to connect a bevy of devices—phones, bikes, cameras, clocks and other household items highlights how it is positioning the Android operating system as a robotics tool.

At various stations, Google I/O highlighted robotics work with the likes of companies such as iRobot, Willow Garage and toymaker Hasbro. iRobot had robots that used tablets as heads and control units—think R2D2 with a crew cut. Willow Garage and Google demonstrated how an Android tablet could be the eyes and ears of the PR2 (right). The PR2 subscribed to the tablet’s orientation and the tablet subscribed to the PR2’s camera images (the eyes).

In a talk, Google project manager Ryan Hickman argued that mobile connectivity and cloud computing could give robots new capabilities with less battery power and memory. By offloading applications like mapping and sensor number crunching to the cloud, robots could become more useful and inexpensive. Mapping, voice and text services and optical character recognition are all cloud-enhancements that can be brought to robots.