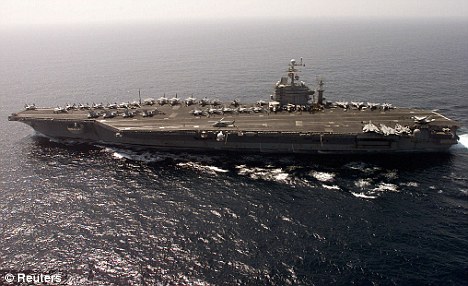 Some may have thought we would never discover the Titanic, but this is an even more ambitious search. Treasure-hunter Bill Warren, of California, is reportedly launching an underwater search to find the body of former Al Qaeda leader Osama Bin Laden. U.S. forces say they buried the former Al Qaeda leader at sea last month from the USS Carl Vinson warship in the North Arabian Sea. But that is the only detail of the location that has been released. The veteran explorer launched the hunt as he does not believe President Obama gave enough proof of the terrorist’s death. He told TMZ he is using hi-tech equipment and several boats in the search, which he says will cost hundreds of thousands of dollars. ‘We do

dings of him and doing a DNA test on the ship. U.S. officials welcomed visitors last month to view the USS Carl Vinson, which became famous as the dead Al Qaeda leader’s last resting place. His body was placed in a ‘weighted bag’, an officer made religious remarks and he was put on a flat board and tipped into the sea, the Pentagon said.