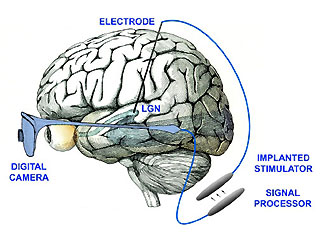 A team of Australian researchers developing a bionic eye that could help restore sight to the blind will test a full prototype later this month.

The Monash Vision Group, a team of 50 scientists, believes it is on track to be the first in the world to implant a microchip into the brain of blind patients.

A patient will wear glasses with a tiny camera, which will act like an eye’s retina. A pocket processor will then convert these images into electronic signals to be sent to a microchip implant in the brain.

At first the team expects to work with patients that have been blinded by trauma like car or industrial accidents.

But at this stage, they are not sure how the technology will react with people who have never seen.

“It’s important that for our first patient that they have had full adult vision so that we know that their brain can process these kinds of signals because it has done so previously,” Dr Pritchard said.

“It will be a lot about how the patient can learn to interpret that information to the optimum level to get the most out of it.”
Lucrative potential
Audio: Bionic eye team set to test prototype (PM)

Another group, Bionic Vision Australia, is working on a different type of implant that will go directly into the eye.

Their technology will target older patients with eye disease.

“What we’re doing is giving them some visual information via a retinal implant so that we can then take advantage of the natural processing abilities of that network of neurons and nerve cells,” she said.

Australia has had a successful history of innovation with medical bionics; first the heart pacemaker and then the cochlear implant for the deaf. Bionic eye technology has grown out of this and the commercial potential is huge.

The procedure will insert 650 hair-thin electrodes into the visual cortex. When fully operationally, the patient will see low resolution black and white images.

Tags: communications manager, heart pacemaker, tiny camera, vision australia, visual information
PREVIOUS
NEXT
No comments yet, be the first one who will leave the comment.