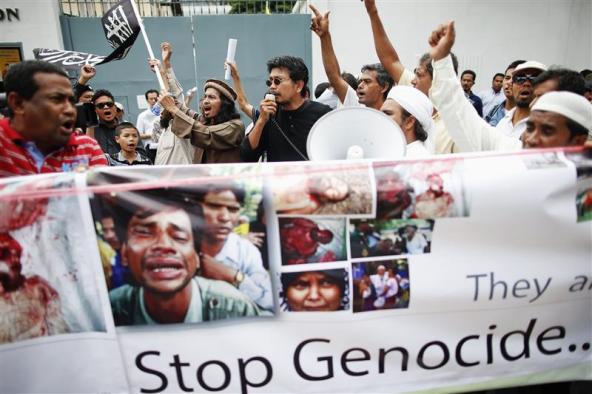 Dubai: The persecution of the Rohingya Muslims minority in Myanmar which has recently made news remains a tragic situation not only for the ethnic groups involved in the fighting but also for the thousands of people who have been killed, injured or displaced.
The UAE has responded to the call for help and will send immediate aid to Myanmar.
President His Highness Shaikh Khalifa Bin Zayed Al Nahyan on Sunday ordered the Khalifa Bin Zayed Al Nahyan Humanitarian Foundation to urgently send relief aid to Rohingya Muslims in Myanmar, following the bloody encounters between Rakhine Buddhists and Rohingya Muslims.
The order came after Foreign Minister Shaikh Abdullah Bin Zayed Al Nahyan on Friday sent a letter to the international community, seeking support to end the plight of the Muslim minority in the country.

Shaikh Abdullah appealed to the international community to put pressure on the Myanmarese government to stop the sectarian strife that has wreaked havoc in the western part of the country.

Myanmarese expatriates in the UAE have expressed their concern about the rising tension back home especially during the month of Ramadan.

Noor Mohammad Tandamiya told Gulf News that his family had decided to leave their home in the Mongdu district and go to the city for refuge.

“The Buddhist extremists would not allow us to go to work, nor to the mosque to pray. They would kill our families if they insist on going to the mosque and the government is not doing anything about it,” Tandamiya said.

“We are having difficulty even just to break our fast. There’s no food, no water. Even if we have money, we cannot buy anything,” he added.

Meanwhile, the United Nations (UN) on Friday issued an appeal for $32.5 million (Dh119 million) in humanitarian aid for people displaced due to the clashes.

Around 60,000 people have been forced to flee their homes in the Kachin State when fighting erupted over a year ago between government troops and the Kachin Independence Organisation.

Over the western region at Rakhine State, at least 77 people have died and 64,000 people were displaced when clashes between Buddhist and Muslim community broke out in June.

Saudi Arabia on Sunday promised to send $50 million in aid for the Muslim minority, the Saudi state news agency reported.

The UN Office for the Coordination of Humanitarian Affairs has asked the Myanmar government to allow aid agencies better access to the conflict areas.

Local media reports have highlighted the lack of medical supplies in government camps where an estimated 40,000 injured Muslims are being taken care of. Food, reports said, was just enough to ‘survive.’