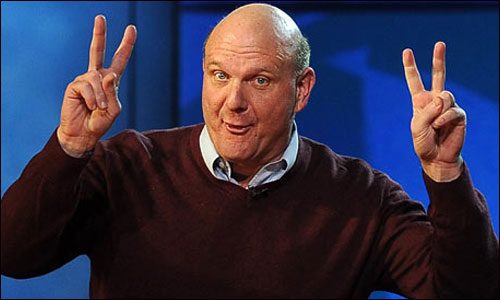 IITs get thumbs up from Microsoft’s Steve Ballmer

New Delhi: Prestigious IITs today got a thumbs up from Microsoft CEO Steve Ballmer who hailed contributions of the students of these institutes and wanted to see some of the “finest and brightest” Indian minds with him at his office.

Ballmer also hailed the research work being done by the students and faculty and interacted with professors of the institute. On a visit to the IIT-Delhi campus, the Micrsoft CEO closeted with faculty of the Computer Science department of the IIT and got to know from them the research works being done on computers and other technologies. “Before coming here I met with the faculty of the Computer Science department. I got to know the kind of research being done…I have been hearing about IIT for many many years and we have a lot of IIT chaps at Microsoft,” he told 1,000-odd budding engineers.

The Microsoft CEO was all praise for the students of the IIT, especially the one in Delhi, and said he wants to see “some of the “finest and brightest minds” among the audience to be with him. In his 40-minute speech, Ballmer referred to the faculty of the IIT-Delhi twice when he mentioned his interaction with them and the research being done by the students. On the first day of his job at Microsoft, Ballmer was asked to read some 70 letters written by a “crazy” IIT-Delhi guy to Bill Gates on why he should be recruited by the company. “I read the letters…That was my first job at the Microsoft…The letters were full of passion and the guy talked about why should be at Microsoft. After reading that, I decided he should be the guy whom I should recruit first,” he said.