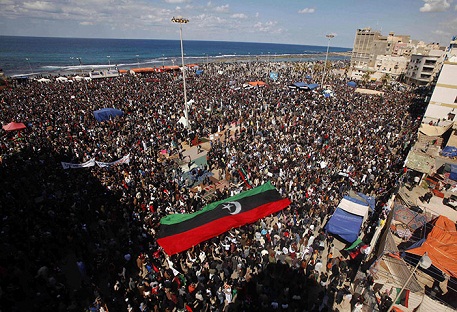 In response to: After Gaddafi, Libyans still prefer one-man rule

This article is a response to another article titled “After Gaddafi, Libyans still prefer one-man rule”, published in various newspapers and online on around 16th of February, and the source is claimed to be “London Agencies, PTI”.

You can find one instance of the aforementioned article here.

First, the title is misleading. In case the writer is referring to autocracy by one-man rule, one must ask, is he trying to say that Libyans still prefer dictatorship?
After all that they went through; the revolution, the war, after people risked and lost their lives to oust Qaddafi; Libyans would still like to have another one?

The writer contradicts himself with the explanation of the title itself: “35 per cent would still like a strong leader or (leaders) for the country in five years’ time.”
But we should not fail to realize, that the term ‘one-man rule’ is not necessarily used in the context of dictatorship only – albeit, in that title it was intended to refer to that sense, noting the comparison made with Qaddafi.

One of the many hysterical claims Qaddafi made on more than one occasion, is that he is not a president and that he has no power to cede in the first place.
“I am the leader of the Fate7 Revolution! I am not something you can destroy; I am a symbol! I am in the hearts of all of my followers!”  Yes, he was previously diagnosed with megalomania.
For that was simply ingenious of him.

By those sham talks, he was able to exempt himself from blame when corruption spread wide in the country; instead, he pointed fingers at officials whom had been appointed by him in the first place. After leaving it with no leader, the country turned into an oligarchy.
Then, his son entered stage, promising reforms; and so it was, the country was plainly a family bequest he was left with.

I know this might seem irrelevant, but my point is, a country needs a one-man rule. Or else chaos would ensue. In Islam, one of the conditions for holding a group prayer is choosing a worthy Imam to lead the others. The simplest example that could be given is how the household is usually run by the father, i.e. “the head of the family.”
It is only natural that there is One person leading the way, so division does not take place. The One leading is the servant for the others. He’s the one upon whom all responsibility falls, and in case of failure, all blame and punishment.
Therefore, it is perfectly alright for Libyans to have a one-man rule, for a stipulated number of years and chosen by democratic elections; like many other countries already have.

Another point, the term Democracy in the article is used ambiguously.
For the past 42 years Libyans were presented only with Qaddafi’s definition of democracy, which he claimed to be of Arabic origin and means: the continuity of sitting on chairs.
A complete distortion of the word.

But now, they have discovered that there are no less than 40 types of democracy.
For instance, there is Constitutional democracy, Liberal democracy, multiparty democracy; there’s even democratic dictatorship. Hence, when the writer said they prefer one-man rule over democracy, he should have stated what kind of Democracy he is talking about.
Also, many people regard democracy as something unreliable; taken into consideration the fact that quantity is not quality.

What they are aiming at here in Libya is mainly the separation of power; to ensure that no power is concentrated with only one aspect of government.
Turkey is a good example before them, to tell you the truth. Parliamentary system is for sure going to be used here, perhaps along with semi-presidential method.
All would be decided at the National Conference that is going to take place in June, by two hundred elected representatives from around the country.

Tags: corruption, dictatorship, fingers, hearts, sham
PREVIOUS
NEXT
No comments yet, be the first one who will leave the comment.