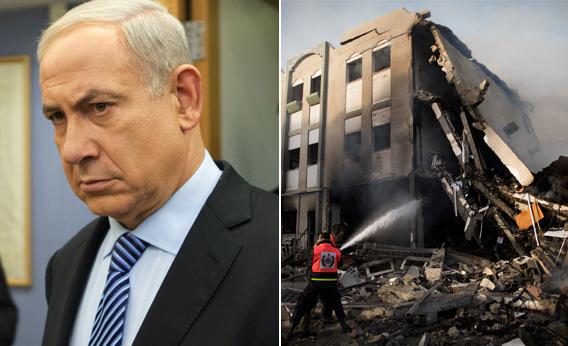 As the conflict in the Gaza Strip reaches its eighth day, there is no tangible evidence to suggest a truce is imminent. The Israeli military has dropped leaflets over the Strip warning civilians to leave their homes and head to specified “safe zones”.

As the violence escalates, almost 30 Palestinian children have been killed; the total death toll now stands at around 150. On Monday, a family with two twin toddlers in the Jabaliya refugee camp was killed in an airstrike.

As rockets are fired from Gaza at Israel, the famed “Iron Dome” anti-missile system is only stopping around half of those streaking across the sky. Five Israelis have now been killed as a result.

To make the carnage stop, what could the terms of a ceasefire be?

Both sides have presented their conditions to Egypt, which is attempting to broker a truce along with Qatar and Turkey. UN Secretary General Ban Ki-moon arrived in Cairo on Monday for the talks.

Hamas’s terms are indisputable; Khaled Meshaal, the head of its Political Bureau, told a press conference on Monday that Israel should lift its siege on Gaza and stop assassinating its senior leaders. They are not unreasonable requests by any means.

Meshaal wants to secure a truce; his presence in Cairo confirms that, as does an article in the New York Times on Friday by Gershon Baskin, co-chairman of the Israel Palestine Centre for Research.

Commenting on the “short sighted” assassination of Ahmed Al-Jabari, Baskin described him as a man who “wasn’t just interested in a long-term ceasefire; he was also the person responsible for enforcing previous ceasefire understandings”. Al-Jabari received a draft proposal for a truce on the morning that he was assassinated; there is only so long that Israel can pretend that it is Palestinians who “don’t want peace”.

So what does Israel want?

According to Foreign Minister Avigdor Lieberman, “The first and absolute condition for a truce is stopping all fire from Gaza.”

Israel also wants a commitment from Egypt that it will prevent weapons being smuggled into Gaza from Sinai; Hamas and other “terror groups” must not go within 500 metres of the border fence; if Israel suspects terrorism is being planned or executed in Gaza, it reserves the right to enter the territory to stamp it out.

With such unbalanced and unreasonable terms, it looks suspiciously as though the ceasefire terms have been drafted so that the Palestinians in Gaza have no option but to refuse them. Perhaps it is in Israel’s interests to keep the crisis boiling, whilst claiming to the outside world that it is promoting peace.

To make matters worse, Israeli Prime Minister Benjamin Netanyahu has threatened a ground invasion of Gaza if the terms of the ceasefire are not met; accept them, or else, is the message to Hamas. But even Netanyahu has understood the damage that a ground invasion could do to his reputation and has decided to give Egypt more time to broker a deal with the Hamas government.

There is no doubt that Hamas is now in a stronger position than it was, for example, in Israel’s 2008 – 2009 assault on Gaza. The Emir of Qatar visited the Gaza Strip last month, the first international leader to break the siege, and Turkey is no longer an ally of Israel after the Israeli army killed Turkish activists on board a flotilla heading for Gaza in 2010.

Egypt’s new government has already distanced itself from the pro-Israel policies of ousted Hosni Mubarak by recalling its ambassador from Israel, sending its Prime Minister to Gaza and keeping the Rafah border crossing open. This week, King Abdullah of Jordan cancelled a visit to Britain to attend the annual fundraising dinner of the Board of Deputies of British Jews, a staunchly pro-Israel group.

Netanyahu’s behaviour risks inviting even further isolation. Egypt and Jordan both have peace agreements with Israel, which were signed to maintain stability in the region. In the light of this week’s events, both governments are under increasing pressure from their citizens to amend or cancel the treaties.

Israel may also pay the price of support from the international community for its belligerence. Social media websites are full of outrage at Israel’s unacceptable aggression.

In Brussels yesterday, EU foreign ministers said that Israel does have a right to defend itself but that it must act proportionately and not kill innocent civilians.

The governments of America, the UK and France are strongly against a ground invasion. French Foreign Minister Laurent Fabius has warned Netanyahu that if he goes ahead with a ground invasion it will be difficult for the international community to back Israel.

In reality, it looks as if Israel wants to do nothing, maintaining the status quo with Gazans living under the siege and occupation so Israelis can continue to live privileged lives next door.

However, with the international community behind Gaza, it is hard to imagine that Israel will get everything that it wants this time; Netanyahu will almost certainly emerge from this with his reputation seriously damaged. He may find himself all alone in the “struggle against terrorism”; that claim may have worked in the past, but it rings hollow now.

Tags: gaza, israel, netanyahu, truce
PREVIOUS
No comments yet, be the first one who will leave the comment.