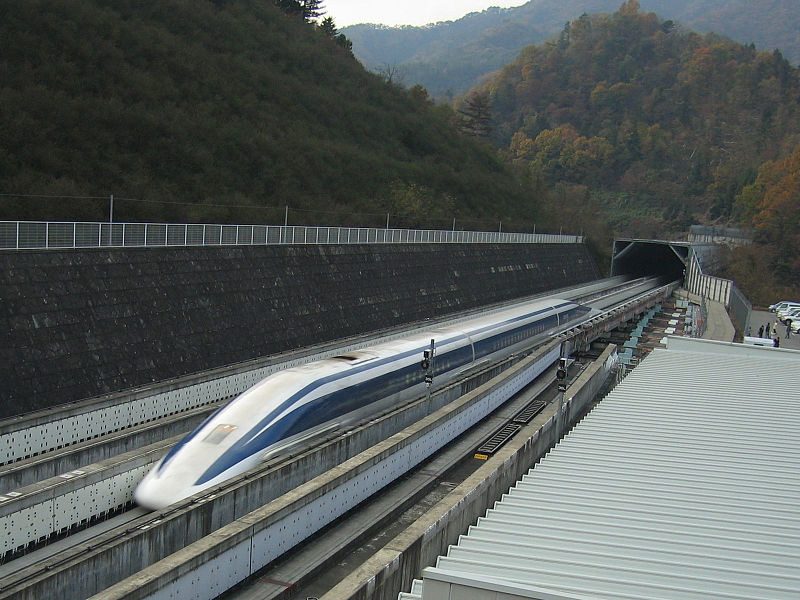 Maglev (derived from magnetic levitation), is a system of transportation that suspends, guides and propels vehicles, predominantly trains, using magnetic levitation from a very large number of magnets for lift and propulsion. This method has the potential to be faster, quieter and smoother than wheeled mass transit systems. The power needed for levitation is usually not a particularly large percentage of the overall consumption; most of the power used is needed to overcome air drag, as with any other high speed train.

The first commercial maglev people mover was simply called “MAGLEV” and officially opened in 1984 near Birmingham, England. It operated on an elevated 600-metre (2,000 ft) section of monorail track between Birmingham International Airport and Birmingham International railway station, running at speeds up to 42 km/h (26 mph); the system was eventually closed in 1995 due to reliability problems.

The term “maglev” refers not only to the vehicles, but to the railway system as well, specifically designed for magnetic levitation and propulsion. All operational implementations of maglev technology have had minimal overlap with wheeled train technology and have not been compatible with conventional rail tracks. Because they cannot share existing infrastructure, these maglev systems must be designed as complete transportation systems. The Applied Levitation SPM Maglev system is inter-operable with steel rail tracks and would permit maglev vehicles and conventional trains to operate at the same time on the same right of way. MAN in Germany also designed a maglev system that worked with conventional rails, but it was never fully developed.

There are two particularly notable types of maglev technology:

Another experimental technology, which was designed, proven mathematically, peer reviewed, and patented, but is yet to be built, is the magnetodynamic suspension (MDS), which uses the attractive magnetic force of a permanent magnet array near a steel track to lift the train and hold it in place. Other technologies such as repulsive permanent magnets and superconducting magnets have seen some research.