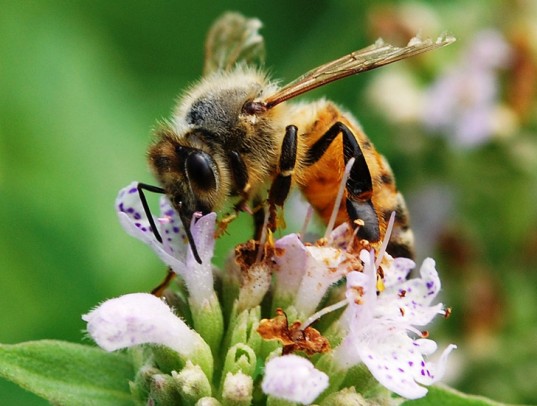 Over the last five years the world’s honey bee population has been steadily dwindling, with many beekeepers citing 2010 as the worst year yet. In order to save these extremely important insects, scientists are working on breeding a new super honey bee that they hope will be resistant to cold, disease, mites and pesticides. If all goes well, the new and improved insect will continue to pollinate our crops for years to come.

Pesky mites, which have become immune to insecticides, have been terrorizing bees significantly for the last few years. According to the U.N., mites, along with viruses, have been responsible for killing 10-30% of Europe’s bees, one third of America’s bees and a whopping 85% of Middle Eastern bees! The external parasites are small and flat, and attach themselves to adult honey bees’ bodies, suck their bee blood and slowly kill them. What’s worse is that the mites also attack the bee brood. By planning the perfect attack, they enter the brood just before the larvae are sealed in together to develop. They feed on the developing bees, causing many of them to grow into weakened adults, often missing legs or wings. The mites spread further when bees from larger colonies “rob” smaller colonies.

Rather than fighting off mites, which seems to be an impossible process, scientists have focused on breeding stronger bees. Some bee populations in Canada have shown resistance to the mites, so they have been isolated, studied, and bred by the University of Manitoba in Winnipeg. Being raised so far north, they are also resilient to the harsh winters of Winnipeg, a quality that European bees lack, as many do not even survive winter.

Although not a solution to the bee crisis, these Canadian bees are strong stock, and could be the “prototype” for a stronger bee population. Since bees pollinate 90% of the world’s food crops, multiple steps must be taken to preserve them, and strengthening from within seems the first logical step.