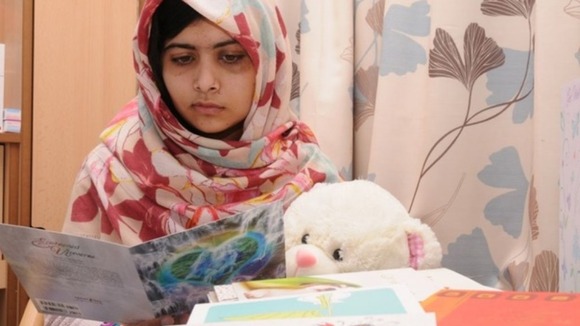 We, along with the whole world, honor the sacrifice of Malala Yousafzai.

Malala Yousafzai, as well all are familiar with her, is a student activist from Pakistan. She is known for her education and women’s rights activism in the Swat Valley, where the Taliban had at times banned girls from attending school.In early 2009, at the age of 11/12, Yousafzai wrote a blog under a pseudonym for the BBC detailing her life under Taliban rule, their attempts to take control of the valley, and her views on promoting education for girls.

On 9 October 2012, Yousafzai was shot in the head and neck in an assassination attempt by Taliban gunmen while returning home on a school bus. She was hit with one bullet, which went through her head, neck, and ended in her shoulder. She was carried to military hospital in Peshawar by air and was operated immediately as the brain had started swelling due to the bullet’s damage. After a while she recovered enough to be carried to UK for intensive rehabilitation. Her recovery has been at a very good speed, to which her father says “is miraculous”.

The assassination attempt received immediate worldwide media coverage and produced an outpouring of sympathy, along with widespread anger. Protests against the shooting were held in several Pakistani cities the day after the attack. Pakistani officials offered a $105,000 (10 million rupee) reward for information leading to the arrest of the attackers. 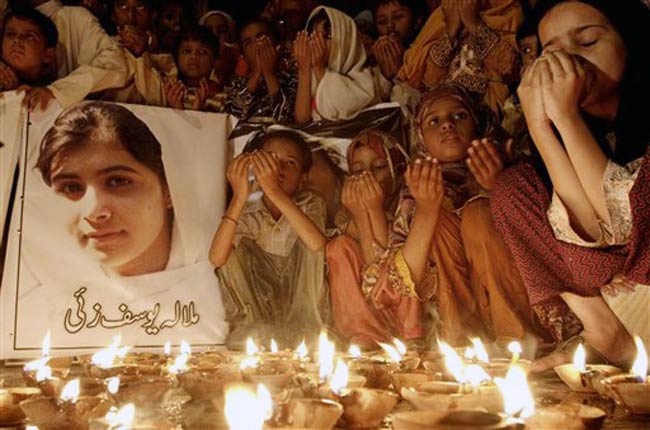 On 15 October 2012, former British Prime Minister Gordon Brown, now the United Nations Special Envoy for Global Education, launched a petition in Yousafzai’s name and “in support of what Malala fought for”. Using the slogan “I am Malala”, the petition’s main demand is that there be no children left out of school by 2015, with the hope that “girls like Malala everywhere will soon be going to school”.Brown said he would hand the petition to President Asif Ali Zardari when he visits Islamabad in November.

Malala Yousafzai sits in a hospital room surrounded by thousands of gifts, cards and messages of support from around the world, a feeling that has left her “inspired and humbled,” according to her father, who appeared in a video released Friday. “She wants me to tell everyone how grateful she is and is amazed that men, women and children from across the world are interested in her well-being,” Ziauddin Yousafzai said.

With the world commemorating November 10 as ‘Malala Day’ in honour of Pakistani child activist Malala Yousafzai, UN Secretary General Ban Ki-moon extended his support to the young girl and her fight for education, describing her as the “global symbol” of every girl’s right to an education. The right to education is denied to 61 million children of primary school age around the world. Girls, boys, the marginalized, rural children, child laborers — the hopes of these 61 million are represented by the struggle and voice of Malala. November 10th is our opportunity to continue to speak out in support of Malala’s vision of every child in school, learning and reaching their full potential.

The Malala Yousafzai Children’s Education Institute, named in honor of Malala, will be announced to help educate the world on the need for universal education. The Malala Institute, supported by the Good Planet Foundation, will publish research reports leading the fight for education for every child still denied the right to school.

NGOs such as Plan International are already stepping up their efforts to educate girls. I have also been approached by dedicated teachers and philanthropists wishing to start Malala schools.

UN Secretary General Ban Ki-moon’s Special Envoy for Global Education, former British Prime Minister Gordon Brown has said November 10, a month after Yousafzai was shot at by the Taliban for campaigning for girls’ education in Pakistan, has been declared Malala Day. It has been declared a global day of action in Malala’s name aimed at getting school places for 32 millions girls around the world who are not attending classes.

‘This has been a breakthrough moment for Pakistan and now we must turn Pakistan’s new ambitions and popular determination into delivery on the ground.’ Events had been planned in over 100 countries, from the UK and USA to Mexico, India, Australia and Sierra Leone to mark the day.

Tens of thousands of people around the world have signed an online petition calling for the Pakistani schoolgirl shot in the head by the Taliban to be nominated for the Nobel Peace Prize.