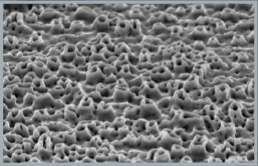 Though I have studied several anodizing and metal coating processes before, Micro Arc Oxidation (MAO) was something new which interested me. I was unaware of this process until I heard Scott Croyle, Vice President of Design at HTC, at this year’s Mobile World Congress that their new HTC One S comes with a tough aluminium unibody construction which was manufactured using MAO process. HTC is known for their unique aluminium unibody constructions which they implement in their smartphone devices.

Scott Croyle described the process in which they baked aluminium coated with microstratic particles in a plasma field, with temperature reaching higher than that of Sun’s surface. Basically, Plasma Electrolytic Oxidation or Micro Arc Oxidation is an electrochemical surface treatment process to produce oxide coatings on metal surfaces. Though it is similar to anodizing, MAO involves considerably higher potential and generates discharges as a result of which plasma is produced, which modifies the surface of the metal. The coating provides high hardness, resistance to wear, heat, rust and also to electrical insulation.

The coating is a chemical conversion of the metal to its oxide protruding both inwards and outwards from the metal surface. Metals like aluminium naturally exhibit the property to form oxide layers covering their surfaces to prevent atmospheric corrosion which renders them passive. The layer is strongly adherent to the metal surface, and it will regrow quickly if scratched off. In conventional anodizing, this layer of oxide is grown on the surface of the metal by the application of electrical potential, while the part is immersed in an acidic electrolyte.

As Scott Croyle says that they actually transform the metal into a ceramic, which is much harder, one of the most significant effects, is that the oxide is partially converted from amorphous alumina into crystalline forms such as corundum which is much harder. As a result, mechanical properties such as wear resistance and toughness are enhanced.

Tags: electrolyte, metal surface, metal surfaces, plasma field, surface treatment
PREVIOUS
NEXT
No comments yet, be the first one who will leave the comment.