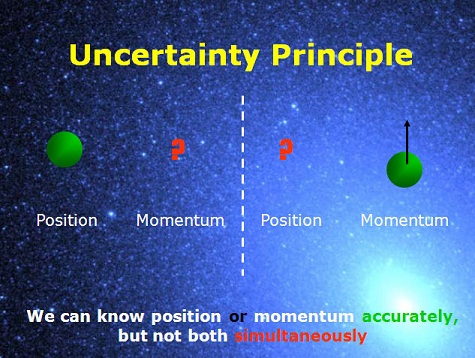 As Einstein’s E=mc2 is of importance to theory of relativity, so is Heisenberg’s uncertainty principle in the world of quantum mechanics which not only is profound, but also popular among non-physicists. This principle states a fundamental limit on the accuracy with which certain pairs of physical properties of a particle, such as position and momentum, can be simultaneously known. In layman’s terms, the more precisely one property is measured, the less precisely the other can be controlled, determined, or known.

But this principle appears in two formulations, which confuses many physicists. A team at the Vienna University prepared a stream of neutrons and determined two spin components simultaneously for each, violating Heisenberg’s principle.

Heisenberg formulated his principle in 1927 as ε(q)η(p) ≥ h/4π, which says that in determining position, there will be an error in momentum, and vice versa. The same year Earle Kennard derived a different formulation which was later generalized by Howard Robertson as σ(q)σ(p) ≥ h/4π. This inequality says that you cannot suppress quantum fluctuations of both position σ(q) and momentum σ(p) lower than a certain limit simultaneously. The fluctuation exists regardless whether it is measured or not, and the inequality does not say anything about what happens when a measurement is performed.

Therefore, Kennard’s formulation is totally different from Heisenberg’s. But many physicists, probably including Heisenberg himself, have been under the misapprehension that both formulations describe virtually the same phenomenon. The one that physicists use in everyday research and call Heisenberg’s uncertainty principle is in fact Kennard’s formulation. It is universally applicable and securely grounded in quantum theory. If it were violated experimentally, the whole of quantum mechanics would break down. Heisenberg’s formulation, however, was proposed as conjecture, so quantum mechanics is not shaken by its violation.

Tags: everyday research, fluctuation, particle, physicists, quantum fluctuations
PREVIOUS
NEXT
No comments yet, be the first one who will leave the comment.