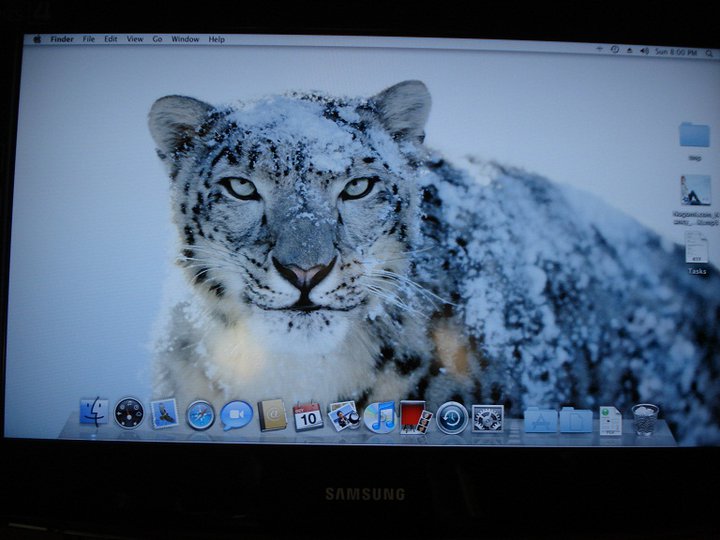 Since Apple switched to Intel hardware, there have been uncountable instances of Apple’s Mac OS X running on non-Apple branded PCs, right from the older Mac OS X Tiger to the most recent Snow Leopard. While few comments show this act as illegal, while others consider it legal given that you possess a license of the Mac OS X software.

I decided to give this a try, since anything which is restricted is fun trying out!

Installation is fairly simple, and took about 20 minutes to finish and took me to the nice Welcome video and few personalization later on was done, Account name, password, time zone, etc.

I used my Mac OS X DVDs I got with the Macbook. DVD-1 was the OS X system, and the DVD-2 had iLife suite and few other applications.
All you have to do is just boot the Mac DVD with the help of any boot able disks which recognize the Apple HFS+ file system.

To name a few, try iBoot, it also has patches which will avoid you common chances of kernel panic.

The Darwin bootloader must start and take a few minutes before presenting you with the language selection screen. After making your desired selection, you will be taken to the Installer screen, with a menu bar on top with several options. The Utilities menu, mainly, is of importance.
Via the Utilities, select the Disk Utility Tool, using which you will be able to Partition your drive(s) in accordance with Mac’s requirements.
I installed it parallelly alongside Windows 7 and Linux – Ubuntu.

A problem which I faced later after completing the installation was the inability to use the Darwin bootloader of the Mac, thus failing to boot the Mac OS X. This seemed to me as the Mac OS X system didn’t support the MBR (Master Boot Record) Partitioning scheme out of the box, patching was needed. But to keep it stock, I re-Partitioned my drive to use GPT scheme (needs complete wipe of target disk), and all the 3 operating systems
booted via the Darwin bootloader without any hassle, and the bootloader has nice GUI. In my case I had the boot flag over the Mac drive.

Another drawback was that the Windows 7 didn’t support GPT scheme same way as Mac didn’t the MBR. If you created additional partitions, they will be accessible through OS X and Linux, but Windows fails to show it as partition, rather you see it as ‘Unallocated Space’ in the Drive Management. If you go on creating a partition off the Device Manager > Disk Management in Windows, it will break the whole installation, and convert all disks to basic, making only Windows boot, and all other partitions un-bootable and unusable.

So be sure what you select- MBR or GPT.

Although it might look very easy to install Mac on Intel from what you might have read above, it is not really so. Fortunately the Installer booted up on my PC, it is not the same with many others who try. Any unmatched hardware, if found, results in the kernel panic, taking you to a screen where you are forced to restart your PC, a screen similar to what we call BSOD (Blue Screen of Death) in Windows.

From my experience, the main reasons I found for the kernel panic were:
Unsupported graphic card (Verbose mode shows lines which may contain the text graphic enabler or similar)
Wrong ACPI configuration (This usually displays as problem with IOACPI kexts, look for this in dependencies on the debug screen)

Apart from this, I also found out it doesn’t work out on a single core processors. All my installations have been on Core 2 Duo Processors.

To overcome kernel panic, people on the internet have created disk images with patched kernels, which might just support booting and installation of Mac OS X on your kind of hardware configuration. There are many of them available now. Most commonly kernel panic appears due to incompatible graphic card, wrong ACPI kexts, the RTC boot and the SATA AHCI (waiting for root device error) option.

Configurations I tested on
I managed to successfully install Mac OS X Snow Leopard on the following non Apple Hardwares:

Everything works out of the box, feels like a real Mac!

2. Dell XPS M1330
Only had some problem with the sound card kexts, found them on kexts website.

Everything worked just right except for the USB hub, it recognized sometimes and didn’t other times. Got it fixed with the USBfix kext.

The most simple way is, with MBR partition scheme, install operating systems in any order except for Linux, install Linux at the end and make sure you use GRUB2, which is the latest one and supports Mac partitions. After the boot, the GRUB bootloader will show you the options of all the OSes on the machine.