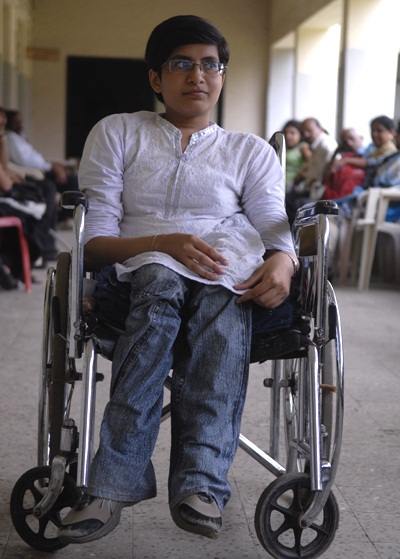 Mahajabeen is a shining example of an indomitable spirit. Confined to a wheelchair since childhood, she persevered to become an MBBS and is now embarking on a P-G course in dermatology.

She was a chubby and cheerful toddler till she suddenly contracted a fever when she was three years old. She was taken to a doctor, who gave her an injection to bring down the fever. But the high dosage turned out to be the kiss of immobility and she ended up being an addition to the polio stats of the state.

Her world had been turned upside down but her growing-up years were unclouded by feelings of revulsion for doctors; instead, she was determined to become one herself to prevent other children from becoming victims of medical negligence.

Twenty-six-year-old Mahajabeen Madarkar’s story is the stuff dreams are made of. And one that came true while confined to a wheelchair.

Mahajabeen, who passed her MBBS course in the first division, was the cynosure of all eyes on Monday at the Rajiv Gandhi University of Health Sciences (RGUHS) when counselling for post-graduation seats commenced. She got a seat in dermatology at Fr Muller Medical College in Mangalore.

“I lost my legs because of the negligence of a doctor. I have suffered enough. In today’s world of increased commercialisation, I do not want kids to become victims of callousness. I took up medicine to become a good doctor and serve the poor,” Mahajabeen told Bangalore Mirror. What makes Mahajabeen different from other disabled youngsters is that she has scaled this particulqar peak despite having studied in the Kannada medium.

Hailing from a middle-class Muslim family in Almatti of Bijapur district, Mahajabeen is the sixth child of retired accountant Saheb Patel B Madarkar and homemaker Shahpuri Begum. Her father said, “We were shocked when we got to know that she would be disabled for life, but had to accept the reality. We put her in school as she wanted to study. But the initial years were very difficult as we were torn between reality and her aspirations.”

Mahajabeen joined the Model Kannada Primary School, three km from her home. “My mother used to carry me to school everyday,” she said. Later she joined D N Durbar School in Bijapur and passed the SSLC in 2003, scoring 92 per cent. “High school was a bit difficult. She mostly studied at home as she could not be carried to the classroom,” her father said.

When she was turned down by colleges in Bijapur, citing her disability, from pursuing a pre-university course with science, a determined Mahajabeen moved to Dharwad and enrolled at SDM College. The college was 70 km from her house, and she got permission to study at home.

“Only when I had lab work, I used to travel to Dharwad. My mom used to carry me in the bus. My friends used to come home and brief me about what happened in class,” she said. Her commitment paid off with a 93 per cent result in PCMB (physics, chemistry, biology and mathematics).
Her mind had been made up for long on a career in medicine. She came third in the CET in the disabled category and joined KIMS (Hubli), her father procuring an educational loan to help her realise her dreams.

Said Mahajabeen, “Except for the fact that I studied in the Kannada medium, I did not have any major problem with regard to academics. Though the terminologies were a bit difficult to grasp in the beginning, I used to study for eight hours after college. I stayed in the hostel and my friends used to push me in my wheelchair to class. During exams, my mother and aunt used to come to the hostel and help with the daily chores as I did not want to trouble my friends.”

She passed her MBBS course with an enviable 65 per cent. Her medical college experience was also a big motivation. “At times I used to be put on out-patient duty and visitors to the hospital would be surprised seeing me. They would say they were amazed and inspired by my determination to succeed and wished me the best,” she said.

However, Mahajabeen’s plans of specialising in radiology fell through because of the steep fees. “I opted for dermatology as a lot of people in the rural areas suffer from skin diseases because of water contamination and other environment-related issues. I want to help them. I also want to open a rehabilitation centre for children affected by polio and other diseases,” she said.

Though it has been difficult for her parents to support her financially, they are leaving no stone unturned to ensure that she realises her goal. Her father managed to mobilise Rs 3.5 lakh for the current year through his savings and by borrowing money. Said Madarkar, “We are still to mobilise funds for her hostel fees, books and college fees for the next two years. It is very tough, but we will do everything possible to ensure that she completes her post-graduation. In fact, the maintenance of her wheelchair alone costs Rs 25,000 annually.”

Happy and confident in her parents’ support and her own abilities, Mahajabeen said, “I never underestimated myself. I knew I can do it and did it. I will do it in the future too.”