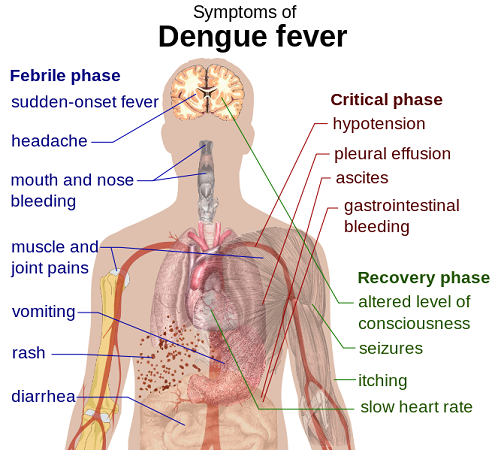 All you need to know about the Dengue Virus

These days I am coming across a lot of patients going down because of the dengue virus. I thought it would be helpful to share some essential DOs and DON’Ts, since the problem of dengue is on the rise and is considered epidemic in about 110 countries, it has become a major concern, therefore, as they say, “a stitch in time, saves nine”, we must be ready to counteract if such a situation arises.

Dengue fever virus (DENV) is an RNA virus of the family Flaviviridae; genus Flavivirus. This virus is mainly transmitted by the Aedes specie of mosquitoes, generally found in tropical and sub-tropical regions. Symptoms include fever, headache, muscle and joint pains, and a characteristic skin rash that is similar to measles. In a small proportion of cases the disease develops into the life-threatening dengue hemorrhagic fever, resulting in bleeding, low levels of blood platelets and blood plasma leakage, or into dengue shock syndrome, where dangerously low blood pressure occurs. Blood platelets are responsible to form a clot in case of any injury to cover up the wound preventing any further bleeding. In case of dengue fever, the platelet count falls below the normal range of 0.15-.045 million to as low as 20 to 30,000. In such extreme cases, if any injury were to occur, it would be very difficult to stop the bleeding, thus a blood transfusion becomes necessary to restore the platelet count.

The mosquito carrying the dengue virus generally bites during the day, hence people should be cautious even during the daytime. An infection can be acquired via a single bite. When a mosquito carrying dengue virus bites a person, the virus enters the skin together with the mosquito’s saliva. It binds to and enters white blood cells, and reproduces inside the cells while they move throughout the body. The white blood cells respond by producing a number of signaling proteins, such as interferon, which are responsible for many of the symptoms, such as the fever, the flu-like symptoms and the severe pains. Furthermore, dysfunction of the bone marrow leads to reduced numbers of platelets, which are necessary for effective blood clotting; this increases the risk of bleeding, the other major complication of dengue fever.

People are advised to immediately report to the doctor in case of appearance of any of the aforementioned symptoms and do not delay in doing the same, since dengue virus spreads very fast throughout the body as it moves along with the white blood cells of the blood, they are circulated all inside the body. Precaution should be taken to avoid any stagnant water or water containers without lids, these generally become the breeding ground for these mosquitoes.

Let’s talk about prevention. While there is no vaccine and definite treatment method available today for dengue virus, the prevention generally involves injection of fluids and antibiotics to stabilize the patient. Apart from this, there are some natural remedies which have worked wonders for people. The two things which are promising are the papaya leaves and prunes. Both these edibles are found to greatly increase the blood platelet count within a short time, thus bringing relief to the patient. Prunes are available packed in any dry fruit store. You can try and get papaya leaves and squeeze juice out of its leaves only and use the juice raw. Do not boil or cook or do anything with the juice, it must be supplied in its raw form. It is found to be very bitter, but who would care when it is saving one’s life?

It is always necessary to stay informed on such diseases, so you at least will have an idea on how to react to it if it is diagnosed at all. Please share this information with others, and let’s hope.

Tags: dengue, prevention, remedies, virus
PREVIOUS
NEXT
No comments yet, be the first one who will leave the comment.