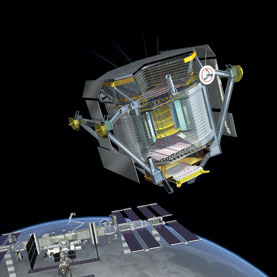 The world’s most advanced cosmic-ray detector took 16 years and $2 billion to build, and not long ago it looked as though it would wind up mothballed in some warehouse. NASA, directed to finish building the space station and retire the space shuttle by the end of 2010, said it simply did not have room in its schedule to launch the instrument anymore. Saving it took a lobbying campaign by physicists and intervention by Congress to extend the shuttle program. And so the shuttle ­Endeavour is scheduled to take off on April 19 for the express purpose of delivering the Alpha Magnetic Spectrometer (AMS) to the International Space Station.

Cosmic rays are subatomic particles and atomic nuclei that zip and zap through space, coming from ordinary stars, supernovae explosions, neutron stars, black holes and who knows what—the last category naturally being of greatest interest and the main impetus for a brand-new instrument. Dark matter is one of those possible mystery sources. Clumps of the stuff out in space might occasionally release blazes of particles that would set the detectors alight. Some physicists also speculate that our planet might be peppered with the odd antiatom coming from distant galaxies made not of matter but of its evil antitwin.