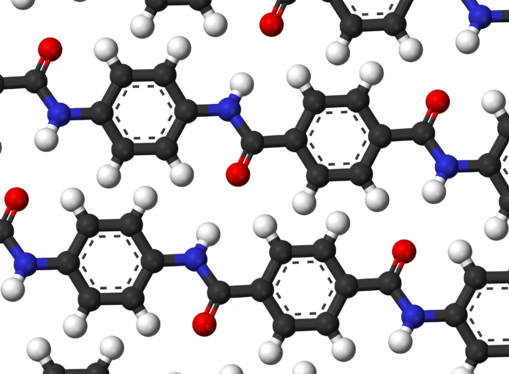 Poly-paraphenylene terephthalamide – branded Kevlar – was invented by Stephanie Kwolek while working for DuPont. In anticipation of a gas shortage, in 1964 her group began searching for a new lightweight strong fiber to use for light but strong tires. The polymers she had been working with at the time, poly-p-Phenylene-terephthalate and polybenzamide, formed liquid crystal while in solution, something unique to those polymers at the time. The solution was “cloudy, opalescent upon being stirred, and of low viscosity” and usually was thrown away. However, Kwolek persuaded the technician, Charles Smullen, who ran the “spinneret” to test her solution, and was amazed to find that the fiber did not break, unlike nylon. Both her supervisor and laboratory director understood the significance of her discovery and a new field of polymer chemistry quickly arose. By 1971, modern Kevlar was introduced. However, Kwolek was not very involved in developing the applications of Kevlar.

When Kevlar is spun, the resulting fiber has a tensile strength of about 3,620 MPa, and a relative density of 1.44. The polymer owes its high strength to the many inter-chain bonds. These inter-molecular hydrogen bonds form between the carbonyl groups and NH centers. Additional strength is derived from aromatic stacking interactions between adjacent strands. These interactions have a greater influence on Kevlar than the van der Waals interactions and chain length that typically influence the properties of other synthetic polymers and fibers such as Dyneema. The presence of salts and certain other impurities, especially calcium, could interfere with the strand interactions and caution is used to avoid inclusion in its production. Kevlar’s structure consists of relatively rigid molecules which tend to form mostly planar sheet-like structures rather like silk protein.