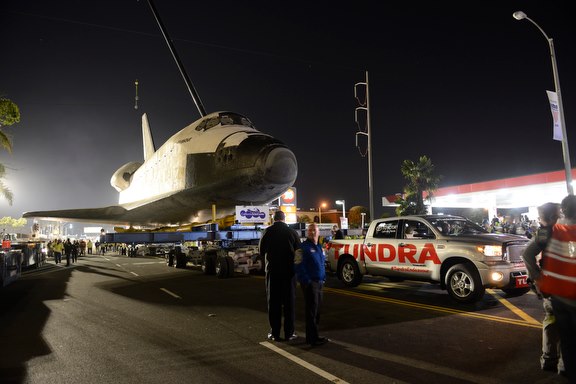 Toyota Tundra takes the Endeavour for its last ride

We have seen ant carry loads that are twice its own, I also came across a beetle (from the family of horned dung beetle) which has the capacity to pull or exert a load 1,150 times its own body weight! About which I will be talking more in probably another post. So coming back to the subject, we are going to talk about the Toyota Tundra CrewMax, a towing truck with a 10,000 pounds (4500 kg) capacity, which was able to pull a massive 300,000 pounds (136,000 kg) of the NASA’s space shuttle here in Los Angeles. The Endeavour, NASA’s retired space shuttle was being relocated to its final home in California Science Center, where it will stay for public display. It was brought to the Los Angeles airport on the back of a NASA’s Boeing 747 shuttle carrier. A special dolly (trailer) built by Sarens Group will tow the Endeavour over its 12 mile course to the Science Center. But in the final quarter mile, towing will be done by the aforementioned Toyota truck.

Looking at the illustration above (courtesy of HowStuffWorks), you can compare the size of the trailer and that of the towing truck. Wondering how a half ton capacity truck can pull such a massive load? Well its all Physics. Actually, the Tundra is not bearing the weight of the Endeavour, if that was the case, the Tundra would be crushed underneath it. It is not carrying the weight, but it is only overcoming the rolling friction of the trailer due to the massive weight of the space shuttle on it. There are (almost) no drag forces since the speed at which the truck will be moving is very low and there is no hitch weight on the truck either. So all that the truck’s horse power should overcome is the rolling friction of the space shuttle’s trailer, which is pretty less compared to the entire weight of the space shuttle. And according to one of the laws of towing, to have an equal torque distribution across all the wheels of the driving coach and the trailer, the mass of the whole unit must be equally distributed. So when we attach a trailer to the coach, we are actually disturbing the equilibrium. That is when we make use of hitches, which are so designed, they shift positions of the weight ultimately resulting in uniform distribution throughout. In the case of Toyota Tundra, a low end torque vehicle with enough horse power, this should be achievable.  Keeping the engine cool would have been the biggest challenge.

Someone said it right, it’s all about ball bearings these days. They play a very major role in reduction of rolling friction. So full pressure tires, flat road, lots of grease in the bearings to reduce the friction, and a horse power producing engine, with all these it shouldn’t be a difficult task to tow a larger weight as this.

Tags: mechanics, nasa, physics, towing, toyota
PREVIOUS
NEXT
No comments yet, be the first one who will leave the comment.